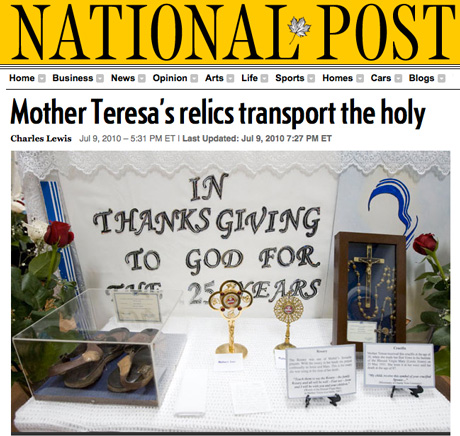 July 2010 – For a holy place it is incredibly small and stuffy and ordinary, the utter antithesis of light-filled cathedrals. In the front room of an old row house in Toronto’s west end, the humidity weighs down on a few deeply faithful Catholics seated on folding chairs or kneeling on the hardwood floor; a fan is the only relief from the heat, and the relief is minimal. This is the chapel floor at the convent of the Missionary Sisters of Charity, part of the Toronto stop of an obscure North American tour of some bits and pieces, relics, of the life of Mother Teresa, the Albanian-born nun who founded the order in India.

The display has been in Baltimore and Boston but there was almost no notice of it coming to Toronto. Given Mother Teresa was the most popular Catholic of the 20th century, and a Nobel Prize winner for her work with Calcutta’s most destitute, it may go down as the most low-key celebrity tour in modern history.
At the front of the chapel was a two-foot tall table. In order to gaze upon a few earthly possessions of Mother Teresa it was necessary to kneel close by.
“So many people appreciated the great work done by Mother Teresa, that to see her rosary really helps one to mediate on her great work and gives a physical expression of her presence,” said Thomas Collins, the Archbishop of the Roman Catholic Archdiocese of Toronto.

On the table were her beat-up sandals in a glass box, the rosary she clutched when she died and the crucifix that hung on her side for 67 years, a gift when she became a nun. There were two more items, the kind that Catholics normally think about when they think of relics, the physical remains that have the greatest pull: a drop of her blood and a bit of hair, each set in four-inch high statues of stylized crosses. A few nuns, dressed in the familiar white robe of the order, the one Mother Teresa was always photographed wearing, sat silently contemplating the life connected to the relics on display. Others who came took off their shoes to acknowledge they were standing on holy ground. In front was a sign that said, “Mother we love you.”

Following her death in 1997, at 87, she was beatified by Pope John Paul II and given the title Blessed Teresa of Calcutta. She is only one step from sainthood.
The fact that her bits of her remains are being shipped around has deep historical roots. This idea of the “transportation of holiness” was laid out in Peter Manseau’s 2009 book, Rag and Bone: A Journey Among the World’s Holy Dead. He described such famous relics as St. Anthony’s shrivelled tongue in Rome, a tooth from the Buddha in Sri Lanka and the finger of St. John the Baptist in Florence.
Mr. Manseau noted in an interview last year that there was a practical reason for travelling relics. In the days when transportation was minimal and crude, it was a way to bring the faith to the world.

“You don’t need to go to Jerusalem, you could bring the idea of Jerusalem to you,” he said. “With that powerful idea it becomes possible for the faith to spread everywhere. It becomes possible to send relics to the far north of Europe or into Asia. They become carriers of stories. And the focal point of faith communities wherever they go. Everywhere the faith went the relics went as well.”

For Catholics especially, who believe in the real presence of Christ in the eucharist, something most Protestants do not share, the idea of the flesh as holy is particularly important. It links, said Archbishop Collins, to the notion of saints.
“For a person who has died, especially these great holy people, for us as Catholics they don’t only survive in memory. They are always present in the communion of saints. We relate to them now, and these physical signs help us to do that. And that’s very valuable. ”